My experience with cats & cat photography:

I’ve been rescuing cats (TNR, adopting and adopting out) here in Jacksonville, FL for more than two decades; first in Avondale and since 2001 in Old Ortega. Some ferals insist on remaining outside and with TNR, they can live their best possible lives w/regular food & medical care. I’ve usually been able to slowly and carefully integrate the rest with the other kitties in my household.

To minimize stress, I have created plenty of cat-friendly high perches and low hiding spots. Some need to be segregated for longer periods. I’ve adopted out a few rescues when the the ‘match’ was perfect. I’ve also adopted kitties from friends who were not able to help at the time a cat was in dire straits.

I currently have five former feral/community kitties happily living inside together with two house cats who were abandoned and one who was tossed out of a SUV. My motley crew of furbabies is fixed & chipped & health issues are managed.

For decades, I’ve been the official photographer for extended family & friends, for celebrations large and small, so 20 years ago when I actively began helping cats, I instinctively started taking their photographs: portraits, antics and to document their lives and their health.

All of our pets’ life stages are worthy of being photographed – from kittenhood to seniorhood!

I cherish the photographs I took of the cats I have cared for.

Our pets are family.

Especially when their ‘time’ comes (and it’s always too soon):

The photographs & our memories will be all we have when they are gone.

Losing a pet is always gut wrenching and grieving is a process that takes time.

I was initially shy about photographing the latter life stages of my cats. A couple of years ago, I realized that it helps me greatly with closure and the grieving process and I can look back on those end-stage photographs and know with certainty that it was truly their time. These photographs are no less cherished than portraits made when they were young, though they are more ‘private’. It’s comforting to know you have them. I think it is similar to photographing aging parents with serious health issues: you’d probably not want to see the images as huge photographs on your wall, but it’s comforting to know you have them (e.g. small framed prints or an album) as a remembrance of that stage of their lives.

The process of dying is the same as for people. Initially food is refused (though with cats one can buy time by syringing liquefied cat food orally) and then water (even orally syringed) itself is refused. There is often a short rebound a day or two before they pass, this is often the hardest to handle emotionally as it looks like they are actually doing better just before they start to slip away. I’ve learned to make good use of that short ‘second wind’.

With one kitty, I quickly taught him to accept being on a harness/leash and I took him outside several times each day to walk around or sit in the garden, eat grass and chirp at the squirrels. He had a blast.

With another cat, I established an ultra comfy perch for her near an open window facing the garden. I’ve also set up large baskets in front of my home office window for one of my special needs kitties when she began her final decline. Ultimately though, I was forced to add a few more baskets when the others wanted a similar five star treatment!

Honor your pets throughout their lifetime…

For those who live with dogs, please know that I also adore and love to photograph dogs. Don’t tell my cats, though.

Originally from NYC, I’m a third-generation avid reader with a love of learning & cats & travel & photography. Following several years on Wall Street, I worked in banking in Germany for nearly 2 decades. My career gave me lots of opportunity for travel & photography. I often participated in German-language photography (practical, theoretical, darkroom, composition et al) seminars. I have an extensive collection of German & English language books on photography, built up over the decades.

In the 1980s & 1990s, I often had my camera equipment (weight > 35 pounds) with me in a backpack that held my Nikon F-3 and more than a handful of lenses, film, filters etc. My travels (business & pleasure) took me all over Europe, Asia and parts of Africa.

In 1997, I moved to Florida to take care of my parents and established a German to English translation company for financial & securities-related texts, reducing the time I could spend on photography.

Unfortunately, by the late 1990s, health reasons were also forcing me to set aside my heavy film camera equipment. Digital photography (& more powerful software) made it possible for me to take up photography again in the early 2000s, although lighter weight, higher quality cameras did not come on the market until more recently.

As it turns out, cats (and people) seem to be quite accepting of smaller-size cameras. Some kitties love posing regardless of what you point at them, whereas others are suspicious of cameras (& people). I love natural light photography: near a window with great light (early morning, late afternoon) or outside. I use flash and reflectors, but always with respect for the cats ability to accept them. Flash can be bounced and the intensity can be managed via settings and physical diffusers. I use multiple dimmable LED lights that are battery operated and portable. As even cats that are skittish around flash photography are ok with LED lights, they have turned out to be quite useful and with the portable lights, it is easy to follow them when they decide on a change of venue.

In the Spring of 2018, I began creating www.furbabypix.com to display select images in my portfolio. In December 2018, the ‘shop’ was added and I began offering pet portrait sessions locally (within 10 miles of 32210-4356).

Visit the portfolio and the shop to see the furbabies! 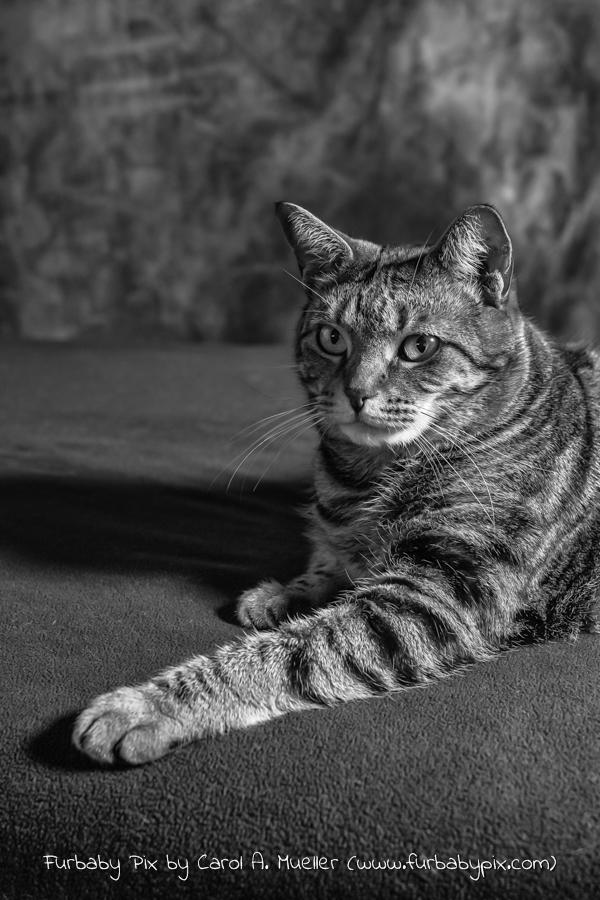